Home » Blogs » The Agile Coach on Patience
× Share this Article

The Agile Coach on Patience

If you’ve found yourself in an airport recently, your patience has probably been put to the test. 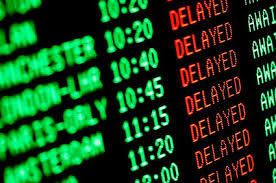 Satellite parking, riding the shuttle bus, checking bags, TSA security, flight delays, gate changes. Once you manage to get on the plane, it becomes a mad rush for overhead bin space. Turbulence, the smell, sitting on the runway for extended periods of time without movement, screaming babies; the list goes on. And would someone please explain to me why we have yet to figure out a better way of getting people on/off the plane? Only one door to enter/exit; seriously? I say, open that hatch in the middle and let us slide down the yellow inflatable thingy for cryin’ out loud. Note: there are 8 doors on a 737. But I digress…

At the end of the day, I have to remind myself that I am not the one who will solve these inevitable issues that arise. Being difficult with a ticket agent or stewardess isn’t going to make a delay any better, and probably worse.

Now, occasionally I will ask questions, and/or make what I believe to be helpful/friendly suggestions. But at some point, I come to realize it’s just wasting my time and theirs. The people on that team are the best ones to figure it out, and they’ll let me know when they do.  They are professionals, and I need to trust them, respect their skills and abilities, and be patient.

This leads me to something I’ve seen in a lot of organizations new to Agile. Many middle managers seem to have a difficult time letting go of the controls. They still feel the need to intervene. They’ve been micromanaging for years, possibly decades, so breaking these practices is tough. Even if they’ve been trained on the importance of giving more authority to their team, in the back of their mind, they’re not sure the team can handle it, so they find themselves continuing to micromanage. They continue to keep close tabs and control their teams and their individual actions. They make most of the decisions. But they keep telling themselves this is only short-term, until they can trust that everyone is doing it the way they would.

Their aim may be true, but they’re effectively preventing their teams from developing into a self-managing, self-organizing team. As a result, the teams continue to look to them for direction, or for the authority to do something they could on their own. I call this the Middle Manager Trap. They carry on making the decisions, all the while questioning why their Agile teams aren’t as responsible as themselves. A vicious cycle.

I’ve seen this snare over and over again. The notion that ‘my team just isn’t ready’ is one of the biggest hindrances to enablement in Agile organizations.

But let’s be honest here. Many of the folks on that new Agile team probably aren’t ready, at least initially. Even with that truth or assumption, as a middle manager, you cannot keep adopting the ‘if I want something done, I’ll do it myself’ defiance.

Being able to take that leap of faith, to trust, to delegate, to be patient, is really an investment you make in other people. It will probably take a while to get a good ROI on your new Agile team. The team or certain individuals may struggle out of the gate. Occasional hiccups are OK. We need to think long term here.

Trust, delegate, give up the reigns, and don’t hover. Allow your teams to self-organize, self-manage, and give them the opportunity to learn from mistakes they make. And be ready to help them out when needed. Your role has changed in the Agile world. Embrace it. You’re now an impediment remover and success enabler.

Are you practicing your patience? What are some of your struggles?

Technical debt: FIX IT!! I spent several years at home supporting my husband as he climbed up the corporate...

Plug it in – Plug it in! Web Panel Plugins Meet TeamRoom

With the latest Spring 2013 release we’ve introduced Web Panel Plugins to the TeamRooms.  The introduction ...